Help your children to learn, develop and grow

Yes, it’s exciting – and yes, the children love every moment of it. But did you know that the skills taught at Little Devils Circus actually have a huge, positive influence on your children’s growth and learning? In fact, many schools throughout the world have actually added ‘circus’ to part of their permanent curriculum.

But the best part about circus is the rich, constructive stimulation it provides for your child. Choosing circus allows you to watch your children’s development unfold before your eyes as they learn skills they love and have a genuine passion for.

Since starting its journey in 2002, Little Devils Circus has been proud to teach circus to kids as an effective way of fostering strong physical and emotional growth. Although it now boasts a fully-equipped circus studio, a team of experienced trainers and Melbourne-wide school programs, it didn’t all appear from thin air... 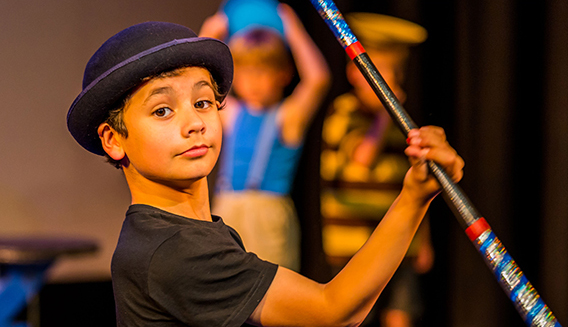 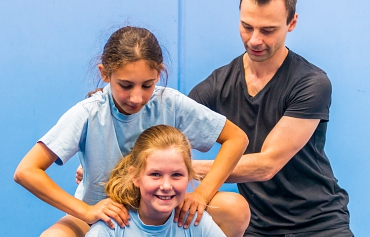 Since founding Little Devils Circus as a ‘2 man band’, owners Louise and Sergei have remained as actively involved as they were on day one– although they now have the added support of a dedicated team behind them.

Louise bought her first set of juggling balls in ’97, and has been hooked ever since.

After working for several years in Britain caring for adults with learning difficulties, she soon realised that as well as being a wonderful skill, circus provided a fantastic opportunity to help others come out of their shell and explore new things.
So, as soon as she returned to Melbourne she decided to pursue her passion for circus and has since been living her dream of using circus to help kids develop and grow.

Sergei started learning circus skills at the age of 12... and by 14 was performing all over the world!

Of course, that’s no surprise when you realise his parents spent 35 years with The Great Moscow Circus.
After developing his own solo feature - an awe-inspiring hand balancing act - he won a place in The Great Moscow Circus’s 1997 – 1999 Australian tour. But as the tour came to a close, Sergei was drawn by an invite from the National Institute of Circus Art (NICA) to help set up their brand new Circus Arts Degree.
Louise turned up to investigate the first short course, and the rest – as they say – is history. 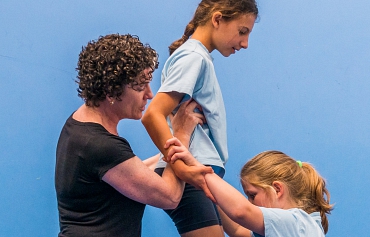 Sergei and Louise met at NICA in 2000. 2 years on, Little Devils Circus was born.

To begin with, they were happy simply running workshops in schools, using equipment they stored in their garage. But the popularity of their workshops took them by surprise, and high demand meant that what started as a few boxes turned into a logistical nightmare.

“We knew that circus skills weren’t really available to learn mainstream” recalls Louise “it was always either just for disadvantaged groups, or quite exclusive clubs, which is why we started teaching it in schools – we wanted to give everyone a shot at learning it. But it wasn’t long before the demand started taking over our house... we were storing so much equipment we simply didn’t have anywhere to live!”

So, to solve their storage situation (and to satisfy the requests of many delighted parents) Little Devils Circus opened its very own studio in 2006.

Louise remembers the biggest challenge initially, was that schools in Melbourne had never considered circus as a teaching tool for children.
"It was known as a great form of entertainment of course" she says, "but few educators understood the power of circus as a medium for strong progressive development. I would go to schools and demonstrate a range of skills to teachers, in the hope some would want their students to try it! It was our most challenging and rewarding hurdle to clear; to this day, a huge portion of our work comes from word of mouth, which reassures me that what we are doing is right!"

“It was a difficult journey” notes Sergei. “Unlike some of the bigger, more established organisations, we didn’t receive any funding – we had to work our way from the ground up. We put a lot of hard work into it, but in a way it makes us even prouder of how far we’ve come.”

Today, Little Devils Circus is continuing to grow, each day a step closer to their goal of making circus available to everyone.

...or fill in this here fine form!

We'll get back to you as soon as possible so you can join in on all the fun straight away!

To enquire about classes or parties at our Circus Studios:
admin@littledevilscircus.com.au

To enquire about us visiting your school:
ben@thecircuscrew.com.au